The Amelia Island Concours just passed a couple of weeks ago, and it’s just amazing the wide assortment of wonderful cars that have once again been brought together. I spend quite a bit of time every week looking at various Corvettes throughout Florida and the Southeast, but did this car stand out. This car is known throughout the Corvette world as the Harley Earl Car. This is a 1963 Corvette Convertible GM Styling car that was made specifically for Mr. Earl under the direction of Bill Mitchell. Mr. Earl used this car primarily at his Palm Beach home and also used it when he was Grand Marshall at the 1964 Daytona 500. The Daytona 500 winner’s trophy is the Harley Earl Cup. This car has been invited to the Bloomington Gold Special Collection more times than any other Corvette. This car is owned by the Mecum Collection in Walworth, WI.

Take a good look at the instrumentation. The passenger side instrument cluster has a Clock, Oil Temp, Inside Temp, Outside Temp, Vacuum Gauge, and an Accelerometer! The side pipes, interior, painted stripe, and the gauges are just a few of these very unique and special custom items from the GM Styling Center. 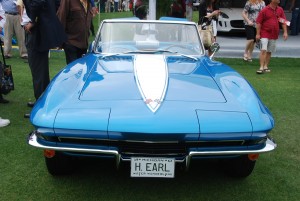 Expert Auto Appraisals performed an inspection on the 1979 BMW M1 in Illinois. I inspected this BMW M1 for a very good client. Giorgetto Giugiaro designed the BMW M1. Unfortunately, BMW was not able … END_OF_DOCUMENT_TOKEN_TO_BE_REPLACED

Expert Auto Appraisals performed an inspection an inspection on this 1967 Lamborghini P400 Miura. I … END_OF_DOCUMENT_TOKEN_TO_BE_REPLACED

I performed an auction inspection on this 1963 Chevrolet Corvette Z06 at The Gooding and Co. … END_OF_DOCUMENT_TOKEN_TO_BE_REPLACED

I performed a pre purchase inspection on this 1992 Porsche 964 Carrera RS in California. The Carrera … END_OF_DOCUMENT_TOKEN_TO_BE_REPLACED